We are in America! Most of our most avid readers will know that we are now in Joliet for my brother's wedding (an extravagant affair taking place this weekend), which has given Isabelle an opportunity to meet all her American family, and is also the reason I haven't updated the blog in a long time. Isabelle was just a dream on the airplane: 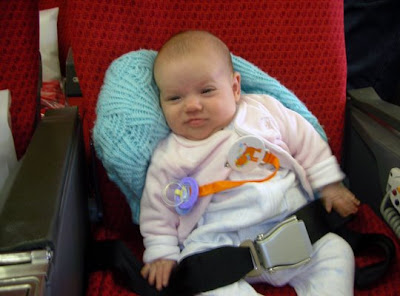 Seriously. She doesn't look too excited in this photograph, but she slept practically the whole time and only made a peep on landing because it was time for her to eat anyway. I don't know what happened... so I don't have any advice, but we got really lucky!

We spent one day getting used to the time difference, and then went right down to Bloomington to meet Issy's Aunt Susan and also her cousins! She had a great time playing with Katie and Gabriel on their Gymini: 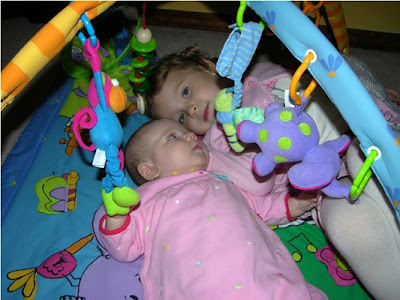 Gabriel is only two months older than Isabelle, but he's already a lot bigger and can do many more things than she can. I hope she will be as cute and smiley as he is! 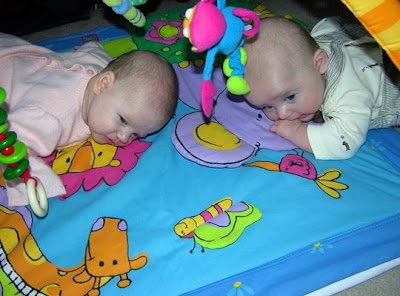 Katie liked Isabelle so well, she was willing to share her blanket with her. Well, I suspect it may have been a little more look-but-don't-touch kind of situation, but in any case it was very generous of Katie to make the gesture. I think she's also showing Isabelle the ropes here. Katie is an excellent big sister, and she also seems to be easing into the role of elder cousin with grace and charm! 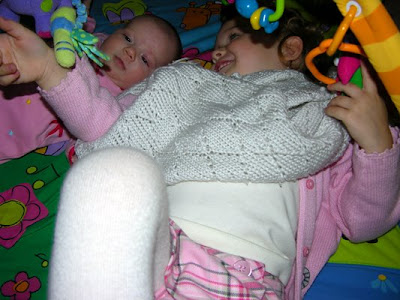 Only poor old Sophie the dog was unimpressed by the bevy of babies. They were taking too much attention away from her cute fluffy ears and googly eyes. Here she is trying to share Grandma's lap with Gabriel: 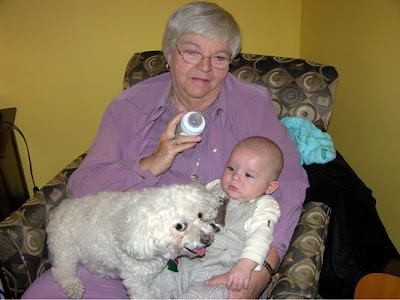 I think she's upset about not being the cutest one in the room anymore. Oh well. We're here for a couple more weeks, so stay in touch for further adventures!
Posted by A Puppet Opera at 3:38 AM