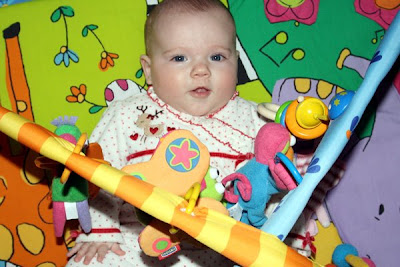 Well, it's January second already, and I'm just sitting down to write a New Year post now. I guess that might tell you a little bit about the state of things here at Puppet Opera Industries. Always a day late and a dollar short (by the way, the picture accompanying this post has basically nothing to do with the new year. It's just that Isabelle is SO CUTE, I can't post enough photos of her).

Indeed we had a bumper 2008; it's hard to believe that a whole year has gone by since that little NY Eve party at Aunt Nancy's last year, when we made the first official announcement about expanding our family, and here we are now in a new home, in a new neighborhood, surrounded by new friends. I know, crazy, right? I've never been one for resolutions (sticking to them, that is), but I do have a big list of ideas for the house, goals for myself (both business and personal), and fun things to do. This year, I’ve decided to write them down and share them. I'm hoping that if I write them in a public place, I will be more able to commit to doing them (in no particular order). Check back with me at the end of the year to see how I did.

1. Finish the (formerly blue) bedroom so that Isabelle can move in there by the end of February. That means painting the ceiling, installing cornice molding, caulking the gap between the baseboard and wall, painting the walls, installing a curtain rod and curtains, and sorting out the carpet, which might have to be changed before a baby can live there.
2. Clean and paint the kitchen. It is foul!
3. Spend less time doing work I dislike, in order to spend more time doing something inspiring.
4. Spend more time writing and less time talking about how I don't have time to write.
5. Take Isabelle on days out more regularly; she needs more culture!
6. Send at least 5 new stories out for submission.
7. Sort out that floorboard with the hole in it, ideally before Isabelle is crawling!
8. Lose the baby weight. Not kidding about this one. That means I intend to be -25 pounds before next Christmas.
9. Ream out the office so that we can use it as an actual room instead of a storage bunker.
10. Pack and transport some of my pictures from my Mom's basement.
11. Read one book per month. I know this seems like a lazy goal, but you'd be amazed at how difficult it is with wee one!
12. Try some new recipes. I think I'm making the same things over and over again...
13. Whip that garden into submission. I drew up a pretty plan, but have yet to put it into action.
14. Buy less stuff, make more, remake other things.

I think that's it. Happy New Year!
Posted by A Puppet Opera at 4:32 PM

Email ThisBlogThis!Share to TwitterShare to FacebookShare to Pinterest
Labels: holidays, just me