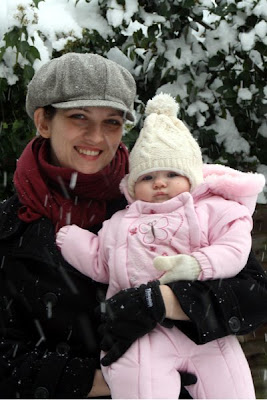 After a relatively mild few weeks (shirtsleeve weather last Monday), we were surprised by a drop in temperature and a rather dramatic overnight accumulation of snow. More than six inches fell overnight and continued to fall throughout the day. Six inches of snow is a lot for England, and to the delight of the neighborhood kids, it settled and stuck. Of course there was widespread panic all over the country (even in a bad winter we don't normally have so much snow, and temperate England is definitely without the same snow-removal resources as Illinois). No school! No buses! No trains! No planes! It seemed like everyone wanted us to stay home and make snowmen. 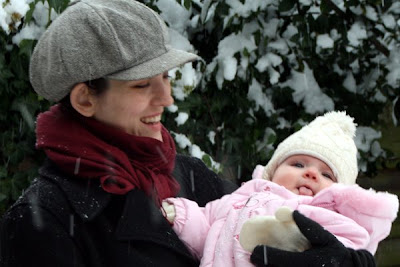 We bundled ourselves up and headed outside to play in the flakes. Isabelle thought it would be a good idea to taste the snow... but then, so did Mommy.

See, here's video proof that it snowed! Apologies for the orientation of this video; it wasn't until I downloaded it from my camera that I realized the video function on Blogger only goes landscape. So I guess you'll have to watch it snowing sideways! We like to do things differently here.

We all had a fun day, watching the flakes, and having snowball fights with our neighbors (who all had the day off today), eating chocolate chip cookies and drinking tea. We hope it snows some more tomorrow.
Posted by A Puppet Opera at 5:35 PM