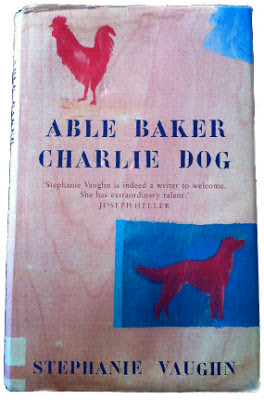 Able Baker Charlie Dog by Stephanie Vaughn (Out of print but I found it secondhand...)

In the title story of Stephanie Vaughn's 1990 collection, we learn about  a world contemporary fiction tells us too little about: the world of an American army base through the eyes of the children who live there. Twelve stories in all, Vaughn writes about a world submerged from view; the kids, their parents, their terribly important place in the world, all hiding in plain sight, invisible save for books like this. Gemma, the main character in the of military stories threaded throughout the book, tells us about growing up in the Army, the frequent moves, the strange attempts at building a community with the other kids on the base, the arcane, stiff-backed code of behavior and ethics drummed into her by her own stiff-backed officer father.  Gemma and her father appear in "Able Baker Charlie Dog," "Kid MacArthur", "Dog Heaven", and "My Mother Breathing Light," clear-eyed, luminous, funny and  affectionate tales about a particular kind of growing up from Niagara to Manila, and finally back to Ohio, which does not seem exactly like home.

The remaining five stories are witty, generous narratives of recognizable women (possibly grown-up versions of Gemma) in varying circumstances and careers. The narrator on her way to a party--with a caged chicken as a gift--in "We're on TV in the Universe" crashes into a patrol car in midwinter; the wife in the "The Architecture of California" comes to understand her husband has made her best friend pregnant; the young mother in "Snow Angel" fights to keep her sanity while trapped in the house with her two young children in the middle of a three-day snowstorm. A writer's writer, Vaughn captures in straightforward, palms flat-on-the-table prose the sometimes hilarious, sometimes heartbreaking, sometimes random perplexities and complications of life. Which is not to say the simple style is at the expense of generous language, or full-bodied descriptives, no, it is simply that Vaughn has an ability to look her subjects square in the face, and tell it like it is, her plainly spoken blend of comedy, irony and terribly sad moments very much like like itself.

The book is out of print, and Vaughn, a professor at Cornell, hasn't published much since then, but she is enjoying a minor revival in her work thanks to multiple appearances in the New Yorker Fiction Podcast. Once she's opened this window onto this hidden corner of the world, I am anxious to know more. Will the novel she has been working on ever appear? I don't know; but I am willing to bide my time and wait.

****EDITED TO ADD: Well call me a cucumber, because I just realized this book has been re-realeased under the title Sweet Talk

, which is available on Amazon. What a dummy.... I had no idea until I opened my copy, started leafing through and realized it was the same book. D'oh!
Posted by A Puppet Opera at 5:19 PM