Today is Isabelle's one-week birthday. We celebrated by having a diaper change and then changing into a new onesie, because the old one was a bit damp. We can't believe she's been with us for a whole week already! It's gone so fast! Everybody tells you that it will, but it's hard to believe until you really experience it. Crazy.

Isabelle continues to be cute and (mostly) well-behaved, but she is already sick of having her picture taken: 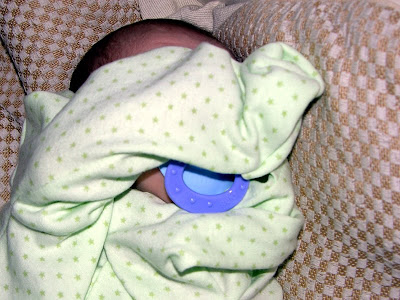 However, she is very good natured about her introduction to cricket. Jules dressed her up in his cricketing hat and plopped her down in front of Test Match Special on the radio, where she happily listened to England play South Africa all weekend. 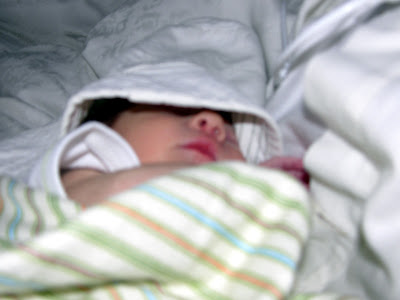 We had a very exciting day yesterday, which we spent at a 90th birthday party for Jules' Granddad. He was very excited to be a great-grandfather, and enjoyed meeting Isabelle, who was all dressed up in a new party frock for the occasion. It was exciting to see the two ends of the familial age spectrum in one room: the very oldest and the very youngest. Here he is holding our little soybean: 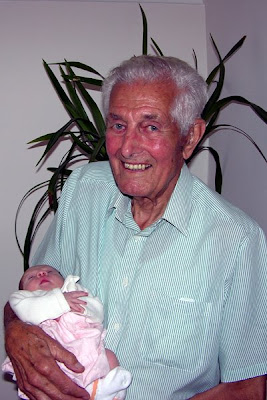 Isn't that exciting! Imagine, when Isabelle is the age he is now, she'll be getting ready for the party celebrating the turn of the 22nd century. Jules and I once asked his grandfather what his favorite childhood toy was, and he said "a metal hoop and a stick to run with it." It seems incredible that one person's lifespan should include playing with a metal hoop and a stick as well as having his 90th birthday party written about on a weblog to be read by family and friends all around the world. Amazing, in fact. What will the world look like to Isabelle when she is old? What swishy advancements of the current era will seem quaint and old-fashioned to her? What will she be able to do that no one has yet dreamed of? What a thought! What a world!

While we were at the party, we took a multi-generational portrait, capturing four generations of the Saunter line in one photo: Jules, his grandfather, Isabelle and Jules' mother, Isabelle's Grandma Shirley. So sweet. 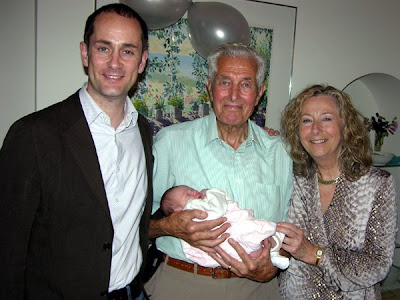 Thanks to Auntie Fay, Jonathan and Nick (who hosted the party at their house) for making us feel very welcome, so much so that one member of our party was comfortable napping on the sofa all afternoon. We were delighted to be there and had a lovely time; though Isabelle would like to extend her apologies for behaving like Swamp Thing right at the very end. She still has to learn about appropriate party manners.
Posted by A Puppet Opera at 11:10 AM

great pic and for once it isn;t jules with the least amount of hair!