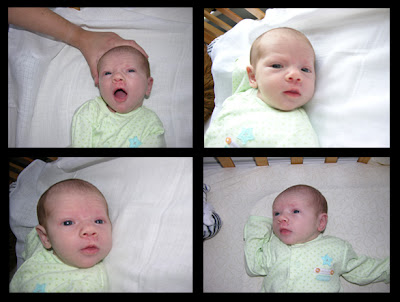 As most people know, Isabelle is going to make her first big Trans-Atlantic trip in mid-October, when we travel to Chicago for her Uncle Bill's wedding (and her baptism). So we have to get a passport for her tout de suite. I was really excited about bringing her over to the American Embassy to get her US passport (because they also give you a little American flag to wave around), but it's on an appointment-only basis, and there are no appointments available before November! So Jules got an application for a British passport, and we are signing her up. It's killing me a little bit that she will be British before she's American, but there you go.

Instead of taking her to a photobooth to get a picture snapped, we decided to make it easy for her and take a picture ourselves so that she wouldn't have to leave her cot. Unfortunately, poor little Isabelle seems to have inherited both her parents' un-photogenic gene, the same one that caused us to have only one useable engagement photo out of the many hundreds taken that day. Poor Isabelle! She really is cute in person; although based on these photographs the immigration officials will be on the lookout for a Martian baby.
Posted by A Puppet Opera at 10:34 AM

Email ThisBlogThis!Share to TwitterShare to FacebookShare to Pinterest
Labels: isabelle