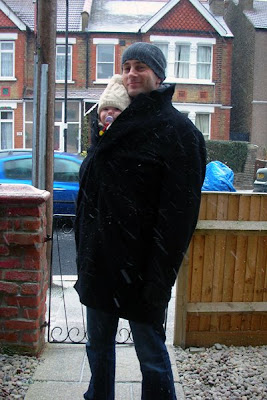 I never thought I would feel this way about a Chicago winter, but yeah, I'm really homesick for the bone-cracking cold and heaps of snow I remember from days gone by. I know, crazy, right? Constant gray weather and insipid dampness just isn't the same... I am missing, yes, actually missing, trudging down Lincoln avenue in inappropriate footwear, the snow melting into my socks; bundling up against cold so harsh the juice in your eyeballs crystallizes; using my car for the first time in April after digging it out from the cairn of snow under which it had rested since January. So imagine my delight on Saturday when we woke up to snow. Actual snow! Big flakes! And then it continued to snow all day long. It didn't really amount to anything around here, maybe half an inch at best, but still, it did snow. There were flakes. They fell from the sky and settled. Jules and Isabelle got all bundled up and went for a walk outside in the swirling snowfall; in this picture he's got his giant coat wrapped around her to keep her warm and toasty. I would also like the world to know that when he bought this giant coat, he was ten pounds lighter than he is now. Skinny. So why such a big coat, old man?

The snow didn't stay around for long (it was gone by Sunday morning), but the wintry feeling sure did. It's gray, and unlikely to brighten up any time before June. Or maybe not even June. This is a difficult time of year for me, the low light and sad weather that spool on relentlessly until spring. I keep watching out my window for the first daffodil to show its yellow head, but that won't happen until March. I'm drawing up plans for our garden, which I hope will be filled with colorful flowers this summer, but is right now a depressing patch of overgrown yuck. I put out the roses my mom sent me for Christmas, but even they are just little stumpy stems, waiting to sprout flowers in May. So to brighten our spirits, we've set upon the kitchen. The wintry weather makes me hungry for roasts and stews and cheesy pasta dishes, and dammit, that's what we're planning to eat from now until our moods lighten. Jules got out the old casserole dish last night and made a really cracking version of chicken and dumplings with cider and rosemary: 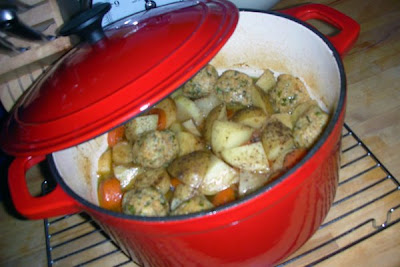 It was from the Hugh Fearnley-Whittingstall recipe published in the Guardian Saturday, which I'm linking to here. It was really good, and seemed fairly easy to make; if you are so inclined, I do encourage you to give it a go. We've got leftovers, but we're keeping them to ourselves.

I knew that Jules was planning on stew for dinner, and for some reason I had an uncontrollable urge to make cupcakes. Cupcakes, la Reine du Gateaux. I love cupcakes, the more frosting, the better! I love them when they're chocolate, I love them when they're pink, I love them stacked sweetly upon a plate. I love them all ways! But this is the first batch that I've made for myself, chocolate with heaps of vanilla buttercream and sprinkles on top. Deeeeeeeeeelicious. It was a Martha Stewart recipe, and if I'm honest the cakes could have been a little more moist, but I think that was more of a problem with the oven than the recipe. Either way, this is a picture of yesterday's plate; today's looks much different! 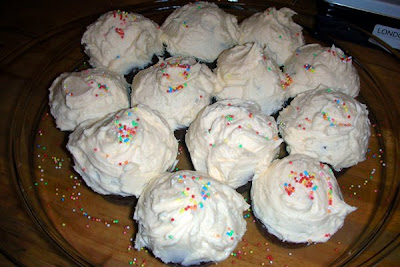 So we're not making much progress on our New Year's diets, but we are eating very well. Happy winter to everyone.
Posted by A Puppet Opera at 10:34 AM