Book Report: A Gate at the Stairs by Lorrie Moore 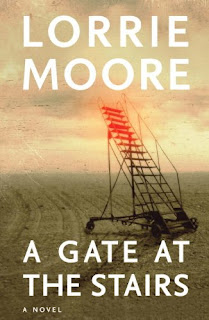 Is there any writer funnier, more jocund and more readable working today than Lorrie Moore? Her subjects: Women. Midwesterners. Square pegs. My people. For me, Moore may be, exactly, the most irresistible contemporary American writer: brainy, humane, unpretentious and warm; seemingly effortlessly lyrical; Lily-Tomlin-funny. She's your hilarious older sister, the college roommate you stay up with until dawn, your best friend, enlisting not only your funny bone but your sympathies and sorrows.

Her latest novel "A Gate at the Stairs" tells the story of Tassie Keltjin, a Wisconsin farm girl living the high life in her first year of college in the university town of Troy (a thinly disguised Madison, WI), and her initiation into the adult world of loss and grief. The daughter of a boutique potato cultivator, she finds work as a nanny for a brainy couple awkwardly on the verge of adoption. This job takes the foreground in a tale ranging over Tassie's home life and love life, the nest she has just departed and the one she's flapping into. Moore's writerly skill and class diagnostics are so good that she can make us feel the uneasiness between town and country in the land behind the cheddar curtain, but also between the different types of farmers on neighboring plots. The gate in question is not some reference to cultural divides, but refers to the plastic gates parents install at stairwells to keep toddlers from harm, and indeed themes of childhood and protectiveness loom large in the novel.

In her previous books, Moore has dealt with big material: baby-with-cancer, loneliness, infidelity, but in a graceful and lighthearted way (yes, you can be lighthearted about the pediatric oncology ward), and in "A Gate at the Stairs" she takes more big bites: racism, war, deceit, in her resolutely breezy way. It's a novel of voices, of things overheard and things said in the heat of the moment, words that don't always mean what they say. The novel’s real backbone is its roving spotlight, in which each character and element is embraced in Tassie’s wondering and exact sensibility. Each relationship, whether it is with her employer Sarah Brink, her goofy brother or her exotic boyfriend Reynaldo, seems to be the essential one, at least while it assumes center stage. Her attention is often lodged at the layer of consciousness itself, working out the essential thingliness of objects; for instance the fact that probably no bachelor ever wore flowers called "bachelor buttons," or Tassie's observation that Wisconsin cheesemakers were shipping their cheddar to Japan because the people in Wisconsin only wanted artisinal cheese made by monks in Montana. Moore gives us stark, melancholy glimpses into her characters' hearts, their fears and disappointments, their hidden longings and their efforts to hold on to their dreams in the face of unfurling misfortune.

As for the jokes, they seem partly an eagerness to entertain and partly a true obsession. Moore is an equal-opportunity comedienne; heroes and villains both crack wise, so you can't use cleverness as a moral index. Although the characters in “A Gate at the Stairs” have an annoying tendency to play coy little word games and make lame little jokes — it’s a kind of nervous tic that enables them to detach themselves from threatening situations — Moore grapples in these pages with the precariousness of life and the irretrievable losses that accumulate over the years. The book bobs along on a jolly current, anchored deep in themes of birth, gestation and burial. One can see it in Tassie's father's potatoes, which lurk unseen beneath the soil until they are unearthed and given magical names: fingerlings, purple Peruvians and Rose Finns; one can see it in the foster babies waiting for the perfect parents; and in Tassie herself, poised in a netherworld between childhood and adulthood, waiting to unfurl her wings and fly.
Posted by A Puppet Opera at 8:12 PM