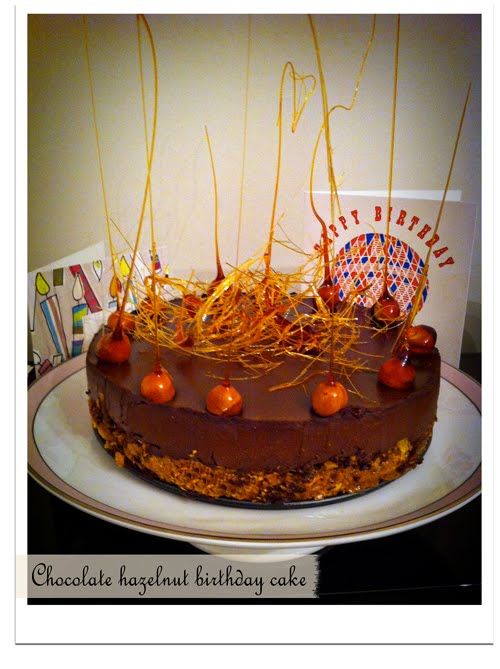 Well hello there lovely! Since my life list included an item to try to cook at least one new recipe per week, I thought I would feature one I recently tried out, the chocolate hazelnut delice I made for Jules' 40th birthday!

Now, doesn't this look like a cake worth turning 40 for? I ask you. Deep chocolate truffle on top of a hazelnut praline base, and sugared hazelnuts around the edge. What a stunner. This is an extra special cake for an extra special occasion, and is sooooooooooo rich, I could really only manage a tiny slice. Also, be warned, it does not keep well, so it would be the perfect finale for a big dinner party, where it would disappear in one go.

I know it looks amazing, but to be perfectly honest, this is one of the easiest cakes I've ever made. I would love to take credit for the recipe, but it's from Raymond Blanc's Kitchen Secrets, which aired on the BBC last year. Having said that, it is a bit time-consuming: you have to make it the day before because there are stages of chilling/resting and ultimately it has to chill in the fridge overnight, but the actual active assembly time was no more than 25 minutes. 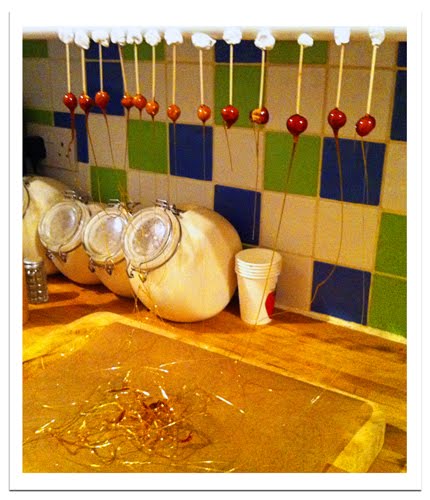 The caramelized hazelnuts drying underneath the edge of my kitchen cupboards (they're glued up with poster putty). 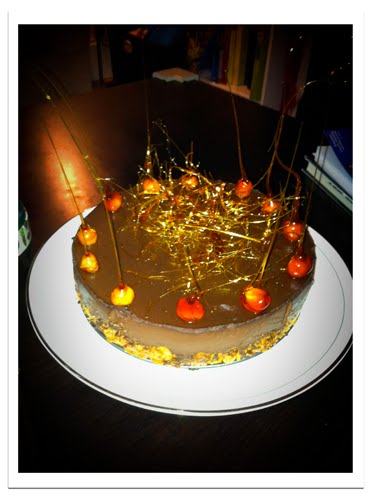 The cake ready to serve. We used a star-shaped sparkler and had a glass of dark muscat wine alongside, and let me tell you, that cake was so delicious we almost missed our table at a Michelin-starred restaurant and stayed home with the rest of it.
Posted by A Puppet Opera at 11:27 AM

Email ThisBlogThis!Share to TwitterShare to FacebookShare to Pinterest
Labels: jules and me, kuchen

This is one of the most informative information I've read. It really helps a lot. Thanks for sharing this and teaching some of your Idea's