Things are moving on apace with the new house. Jules spoke to the solicitor today, and our next step is to fix the moving date with the vendor and write a really, really big check. Jiminy cricket. We were over at Jules' dad's yesterday, and he gave us a bunch of boxes, which are now staring at us malevolently from our back bedroom. The poor, unloved back bedroom that's been home to all our spare parts and the occasional guest for the last three years is now acting as a way-station between our current domicile and future one. It's just so sad. We both have a humungous list of things to do before we can go, and Bump is making it very difficult to get motivated to do anything other than laze about eating ice cream. Silly old Bump.

On a happier note, we went to pick up the rocking chair Jules bought from ebay yesterday. It's cute, a little Parker Knoll mid-century modern thing with squashy cushions. £35 all in: 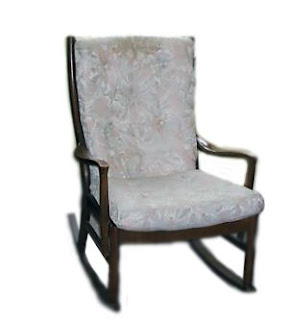 (Pictured with the actual cushions) Score! An identical one went for £200 on ebay last week. I'm thinking it will be nice to sit in to rock Baby to sleep. The couple who sold it were a retired couple who are moving abroad, and were apparently delighted to hear that it was going to a new mom; that's the reason their son-in-law bought it for their daughter in the first place. The cushions need recovering and I'm trying to find a nice fabric for it. I really like this Eames fabric: 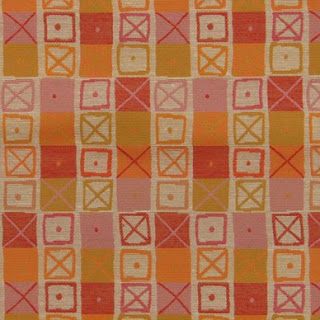 ... but it's $150 per yard! Too expensive for something that might get baby sick on it, so I'll keep looking for something equally cool but more affordable.
Posted by A Puppet Opera at 11:17 AM