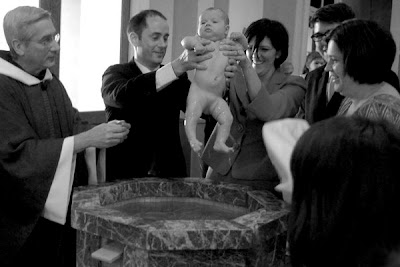 I should have posted these earlier, but here are some photos of Isabelle's baptism, at St. John's on Sunday the 26th. She was very brave about being dunked in the font (yes, I blurred her lady bits out because I didn't want them live on the internet), and even more brave about all the attention and gifts she received afterwards. Thanks to everyone who made her big day an extremely special one. 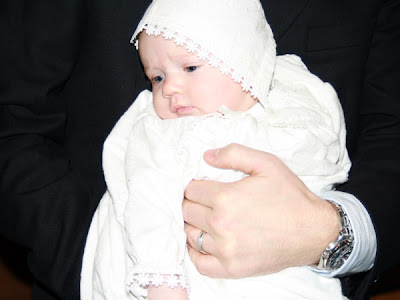 After her dunking Isabelle got all dressed in the christening gown my mom made for me to wear at my baptism, the same gown subsequently worn by Susan, Bill, Katie and Gabriel. You can't see it, but underneath she is wearing the hand-stitched petticoat that my DAD wore under his christening gown! The petticoat is trimmed with lace my grandmother tatted by hand and sewed on to the garment she made for him. Isabelle was so delighted to be able to carry on such a sweet tradition. 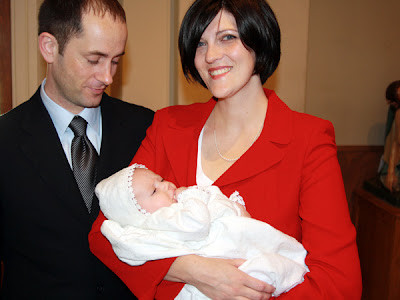 Jules and I were excited to be able to have Isabelle baptized at St. John's, where we got married four years ago (I wrote about it in my entry for October 8th). Father John did at our wedding, and we were delighted that he was able to be a big part of Isabelle's day as well. Although, I think he looks pretty pleased in this photograph too, so maybe the feeling was mutual. 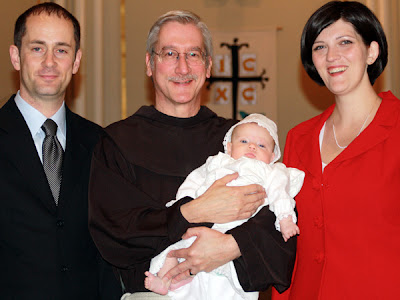 We had a fun party at my Mom and Dad's house afterwards, where we toasted Isabelle with a glass of champagne and ate a wonderful lunch that my Mom had been working for days to prepare. We were lucky to have Bill's photographer friend Kevin there, so he was able to shoot an update of our family photo now that we have three new additions (Isabelle, Gabriel and Nina). Here is our new family photograph: 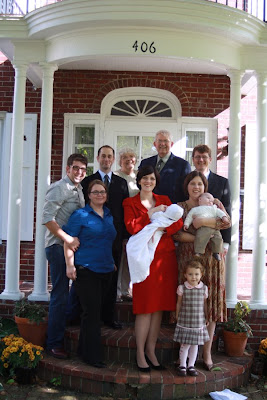 Bill and Nina were very good about spending the first day of their honeymoon with all of us so that we could celebrate Issy's big day. We owe them huge!
Posted by A Puppet Opera at 3:04 AM