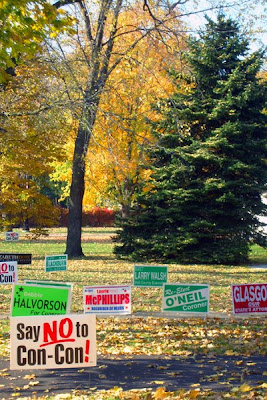 Woo hoo! By now you have probably already heard that election results are in and that Barack Obama was elected America's 44th president yesterday. Hooray! I have been a big, and vocal, supporter of Mr. O way back since his first Illinois senate campaigns, and am SO EXCITED to see him swept into the highest office in the land. Not least because it puts paid to all those who argued with me over the last two years about how Obama didn't have a snowball's chance in Hell of being elected. Ha! Put that in your pipe and smoke it, naysayers.

Isabelle went with me to the polling place yesterday to vote, and of course everybody made a big fuss over her, not obviously bothered by the fact that she's a British citizen. The second (blurry) picture is courtesy of my mom, who happened to come into the polling place with my dad while we were in the voting booth. We wanted to record Isabelle's part in this historic election! 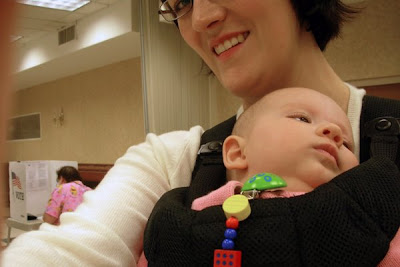 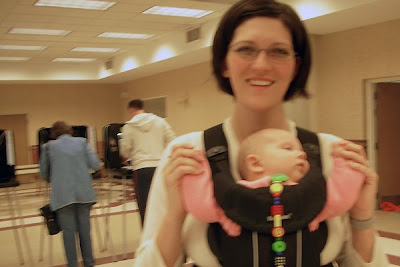 Here in Will County, at least, the Democratic party ruled. Which is not surprising, considering that some of the candidates were running unopposed. Walsh, Durbin and Halvorson all beat their Republican opponents; and we are also glad to report that the referendum to call an Illinois constitutional convention also failed. Hooray! Though it was one of the longest presidential campaigns in US history (remember when Edwards first said he was running at Christmas in 2006?), we were so excited to do our civic duty and take part in it. Hopefully this will mean the winds of change will blow mighty and proud.
Posted by A Puppet Opera at 2:43 PM