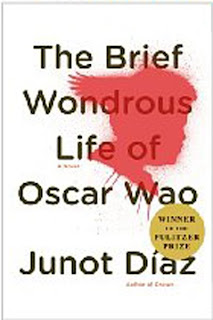 The hero of Junot Diaz’s impressive Pulitzer Prizewinning first novel “The Brief Wondrous Life of Oscar Wao,” is a fat, self-loathing dweeb and aspiring science fiction writer who dreams of becoming “the Dominican Tolkien.” He’s one of those kids who (let’s be honest here and admit that we are too) tremble with fear during gym class and use “a lot of huge-sounding nerd words like indefatigable and ubiquitous” when talking to kids who could barely finish high school. He moons after girls who won’t give him the time of day and enters and leaves college a sad virgin. He wears “his nerdiness like a Jedi wore his light saber”; he “couldn’t have passed for Normal if he’d wanted to.”

This funny, keenly observed, street-smart novel unfolds from a comic portrait of a second-generation Dominican geek into a harrowing tale of the history and burdens of one immigrant family. An extraordinarily vibrant book that’s fueled by a sharp, contemporary urban voice equally confident talking about Tolkien and Dominican dictator Trujillo, Japanese anime and ancient familial curses, dorm life at Rutgers and secret police raids in Santo Domingo. It’s a Gabriel Garcia Marquez tale told by Kanye West supported by David Foster Wallace-style footnotes and asides and peppered with a sassy Spanglish that even a suburban gringa like me can easily understand. And with it he conjures up the two worlds his characters inhabit: the Dominican Republic, the ghost-haunted motherland that still exerts a powerful hold on their nightmares and dreams; and America, the land of so-so possibilities to which they fled as part of the great flood of mid-century Dominican immigration.

The novel’s two narrators, Oscar’s sister Lola and Yunior, his sometime roommate at Rutgers (and would-be boyfriend of Lola), do their best to get Oscar to shape up and engage with the world. They try getting him to eat right and exercise, leave his dorm room and enter the human race. But though Oscar half-assedly makes an attempt, he eventually tells them both to leave him alone, and retreats into his writing, suicidal thoughts, and video games. Yunior begins to believe that Oscar (dubbed "Oscar Wao" a Dominican mispronunciation of Oscar Wilde, whom he seems to resemble in his Doctor Who Halloween costume) is suffering from an ancient family curse, “some high-level fuku” that has doomed him, like his mother, to a life of unhappiness and despair.

To understand in full Oscar's dilemma and his cursed existence, we hear in due course about his and Lola’s mother Beli, the “daughter of a doctor and a nurse,” who as a child in Trujillo’s Santo Domingo experienced almost unspeakable pain and loss: the incarceration and torture of her father by the secret police, the accidental murder of her mother, the death of her two sisters in freak, suspicious accidents. Orphaned, beaten and abandoned, Beli is taken in by her father’s cousin and grows up to be one of the most desirable young women in Santo Domingo, who eventually has an affair with a dangerous man known only as The Gangster—one of Trujillo’s thugs. The affair ultimately culminates in a savage beating in the sugarcane fields, a beating that nearly ends her life, but propels her towards a new life exiled in the United States.

Diaz writes about Trujillo-era Santo Domingo with the same energy he writes about contemporary New Jersey, and the slangy, badass voice with which he tells his story is well-suited to conveying the absurdities of the human condition, whether it be living under a dictator who could wipe out your whole family on a whim, or the injustices of being an introverted dork with a weight problem. What is significant about this novel is that Diaz opens a window onto the sorrows of Dominican history, the struggles of the immigrant diaspora and the intimacies of an American family and treats all with equal sensitivity and insight. And with this electric, muscular offering, Diaz adds yet another voice to the longer, ever-expanding story of the American experience.
Posted by A Puppet Opera at 5:25 PM