From Russia With Love

Much fun has been made in the press lately about Secretary of State Hillary Clinton's apparent crush on UK Foreign Secretary David Miliband: 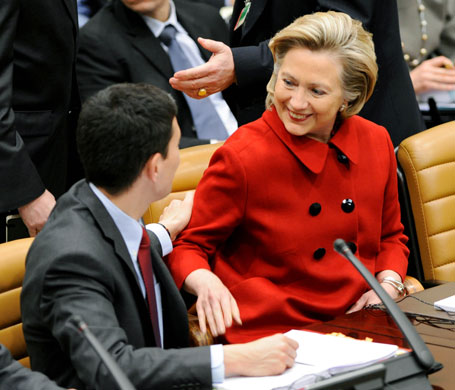 If these pictures are anything to go by, I'd say she's probably giggling every time he makes a shrewd diplomatic maneuver and passing him notes under the bargaining table, waiting for him at his locker during breakouts and pouting jealously every time he talks to that stone fox (boo!) Angela Merkel. And as someone who has had nerd crushes on everyone from Stephen Fry to that guy who plays a PC on the Mac ads, I'm all for it. You go, Hillary. It's about time we brought a little romance to boring NATO conferences. I'm right there with you.
Posted by A Puppet Opera at 10:29 AM

You got to hand it to Secretary David Miliband for taking one for the team.