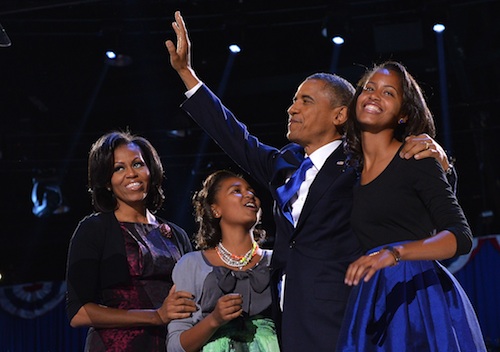 Okay everybody! Look what happened! Calloo callay! We all took part in our democratic process, and sent a Chicagoan to the White House for another four years!

I don't really need to add a lot more to say about this, except that a. Obama was very popular among women voters, so yes, girls, we did this together. Considering women couldn't even vote until 1920, it's fantastic to have had such a big impact in such an important election. And b., female candidates had a great night! New Hampshire has a new female governor and the senate now has 19 members who are women.

And finally, hooray! four more years of First Lady fashion! For the victory party in Chicago, Mrs. O wore a magenta silk dress by Michael Kors, recycled from an event in 2010. You have to love a Mom in Chief who shops her own closet, even for a major, major event. March on, sister suffragettes.

Email ThisBlogThis!Share to TwitterShare to FacebookShare to Pinterest
Labels: family stuff, just me