Happy Mondays: Sleep it out

So, if you have been inhabiting the Mom-sphere or the Twitterverse or the world in general, you have probably already heard about Gretchen Rubin, and The Happiness Project. The message she wants to share with the world is that we have to stop feeling guilty about having it all or not having it all or winning the battle of working mom vs. non-working mom and give ourselves a break. And with the crummy weather and bad economy, don't you think that's a great idea? I do. Even though the whole world has heard about Ms. Rubin, her work was new to me, so I thought I'd give her happiness challenge a go, and share the results with Team Puppet Opera. Not that I'm un-happy, but after looking at what she had to say, I did realize that there were things I am making myself feel bad about (what?!?! I'm not knitting my own children's muesli? I feel terrible about that!) that are really kind of stupid. So first on the list is to get more sleep.

More after the jump.


Apart from feeling crummy, lack of sleep can cause a lot of associated health problems, including wrinkles!!! and weight gain!!!! Anybody with kids can tell you that uninterrupted sleep is definitely a precious commodity, but to be honest, there are a lot of nights when nobody wakes up crying. But I still feel like on my best day I would be happier with a little more more shut-eye! So I did a sleep audit: I usually get about seven hours on a good night, which is a lot, but I think I probably need a bit more. So what's stopping me? Well for one thing, white curtains.

I love my bedroom, and I love the summery white curtains, but my white curtains allow a lot of light to leak in, and that is a problem here in Northern Europe, where it will be fully sunshiny at 4:30 in the AM on midsummer's day. And that means, I'm going to be feeling like waking up way before I'm ready. Solution? I can't stand blackout blinds so I'm going with this very awesome Holly Golightly eye mask from Fred Flare: 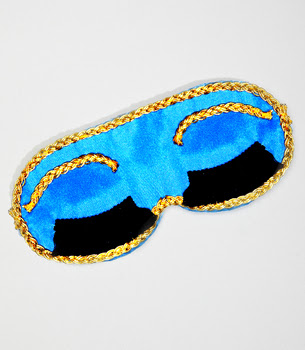 Another thing I've been worried about lately is using my iPhone as a clock.... yeah, I know... But the fact is, scientists don't really know what effects mobile phones are having on us long-term, so maybe it's a good idea to have it off overnight. A more immediate effect is that I will stop checking Instagram before bed, and instead read a chapter of a book or some poetry, which I'm almost positive will help me get a better night's sleep.

Where I really fall apart is physically going up to bed. Typically I'll doze off in front of a movie or something, and then really not want to go up to bed because it is SUCH A DRAG. I'm kind of a four-year-old that way. To make it easier, I'm going to do all the fun stuff like take off my makeup while I'm still in a mood to do it (i.e. when I have energy to do it, not when it's late and I'm crabby). I'm gonna try some other good stuff too, like start waking up at the same time every day, and when I get up I'm going to make my bed right away and feel those blue skies smiling at me.