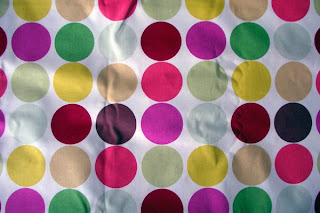 This is the fabric I bought yesterday for the rocking chair that will go in Bump's room. I know I should have probably ironed it before taking a photo of it, but I just couldn't be bothered. It's going to look so cute on the chair, and the best part is that it's washable so in the event of spills and baby sick, I'll be able to pull it off the chair and throw it in the machine. That is, if I can figure out how to make buttonholes on my sewing machine... otherwise it might be permanently sewn on to the chair.

Also, we ordered a new mattress for the new bedroom set we hope to acquire once we move, which was exciting. But not as exciting as auditioning the mattress in Selfridge's in the middle of the afternoon last week. They encourage you to lie down on the sample beds and get comfortable, but still it's weird to be taking a nap in front of the elevators in a busy department store on a Thursday. Although the sales staff didn't seem to care; they politely reminded us the store was open until 9 so as long as we were out by then we'd be fine. So now we have a new mattress, which will be delivered after we move in, and will (fingers crossed!!!) fit into the new bed that we haven't actually ordered yet. In my dreams, I would love our new bedroom to look like this swishy design from Barbara Barry for Baker: 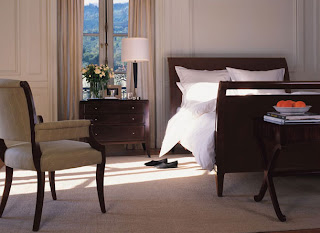 Although that's not exactly the style of bed we want to buy, and the actual room is pokier, this is my dream of what it will look like when it's finished. Isn't this so elegant? I love it. Marshall Field's on State Street used to have a whole Barbara Barry suite on the seventh floor that you could swan around imagining yourself living in. So glamorous! So All About Eve! Although the Field's staff weren't as accommodating as the Selfridge's staff when I invited a bunch of people around for cocktails and dinner in "my apartment" on the showroom floor. And that's why Macy's was able to move in and steal Marshall Fields' soul.

edited to add: So, since I wrote this post originally, I watched a program on the BBC about Harry Gordon Selfridge (the man behind Selfridge's), and it turned out that not only was he American, but that he worked at Marshall Field & Co. with Marshall Field for 25 years! And that Field saw him as his protegé... but not enough to rename the store "Marshall Field, Selfridge & Co.", so HG Selfridge took his show to London. Selfridge's on Oxford Street (the building, like MF State Street was also designed by Louis Sullivan) and opened an Edwardian shopping emporium to rival that of Marshall Field himself. One of his original maxims was that anyone of any class or creed could find something to buy there, and he appealed to the lady shopper by installing-- wait for it-- Ladies' Toilets in the store, the first of their time (ladies of the day were not expected to stay in town all day; you had to go home if you had to, um, go). Interesting, no?
Posted by A Puppet Opera at 2:45 PM

My advice, my sweet Sarah is snap tape. Because baby sick is inevitable.