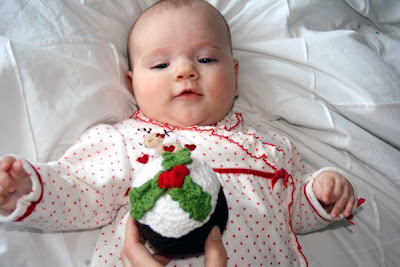 Well, here it is, already the 27th and Christmas, so long anticipated and so diligently prepared for, is now behind us. The wrapping neatly folded and put away (thanks, Jules), and all the gifts shelved and hung up and stacked. We are now dreaming up ways to use the leftovers ("Not this again!") and making our way through the books and toys so generously left by Santa. 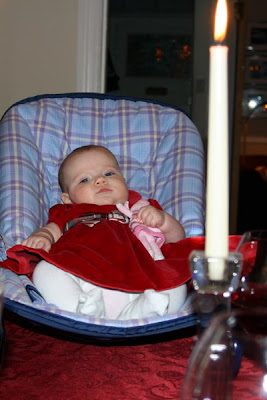 So cute in her fancy Christmas dress!

It was a weird one for both of us this year; due to a confluence of factors we spent the day on our own. Dinner for two (though Isabelle graciously kept us company on the end of the table while we ate), drinks for two, dessert for two. Presents for one hundred (I think the stack of gifts under the tree was easily one of the biggest in history). It was a tiny little Christmas. It was okay. It was fine. Although somehow not as festive. The eggserroneous just wasn't as delicious without having to fight Bill for a piece, and it seemed a bit silly to have the entire Christmas pudding for ourselves, so we ate the chocolate brownies we already had. Except for the grander-than-usual food, the dress-up clothes and the fancy china, it really could have been an ordinary Thursday night. 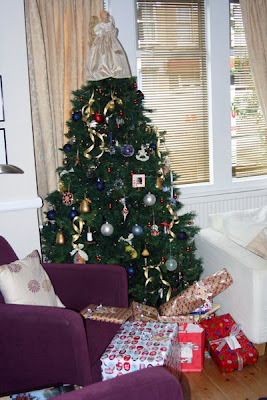 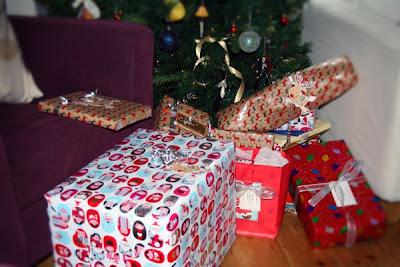 Santa was good to us this year 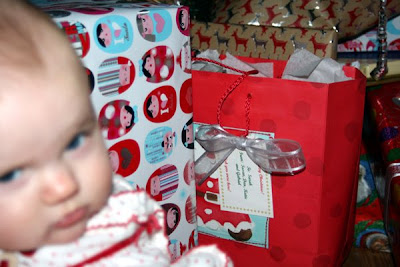 Isabelle is not as impressed as she should be

I'm not used to this; in my family there is always a great deal of activity and bluster in the run-up to Christmas Eve. My mom would have been baking since the day after Thanksgiving, there would be nightly trips to the mall to shop for the perfect present, choir practice to attend and the church to decorate (all those bristling fake trees and the miles of are-they-gonna-stay-lit? lights), and Christmas carols to bash through on the piano. And then Christmas itself, the Christmas Eve dinner and new pajamas to unwrap, Midnight Mass, a piece of potica when we get home. Christmas early-morning present unwrapping (five o'clock is morning, right?), eggserroneous, big dinner, napping. Lots of people, a tremendous amount of noise, dogs barking, the cats (when we had them) causing trouble, snow and ice. That's the Christmas I'm used to. But this year, it was very different. Not only because it was small, but also because for the first time, we were helping Santa to put the gifts under the tree. For the first time ever I wrapped presents on Christmas Eve, and also for the first time ever, I didn't spend more on the wrapping than the gifts. It's just not the same when you order gifts from Amazon and select the "please wrap this for me" option. For the first time ever, I gave gifts that I never actually saw. Odd. Uncomfortable. It made me miss my family and being home more than ever.

But still, we survived, and made some new traditions of our own. We hung up our stockings by the fireplace in our bedroom (the only place the hooks would fit), so we opened our Christmas stockings in bed, and then ate a lazy breakfast. Between Isabelle's napping and feeding, we only finished unwrapping gifts around 6PM, even though we did start to do it at 11. We got lovely presents from lots of people: books (everybody), toys (Isabelle), nerdy beer glasses & clothes (Jules), a fancy French papier maché statue (Isabelle) a spa day (me), ornaments (everybody), and treats all around. Isabelle even found a crochet Christmas pudding rattle in her stocking, which she is playing with in one of the photographs. We might turn it into an ornament later. Santa was very good to us this year! Then for dinner we had an elegant menu of endive-Stilton-walnut-pear salad, roast duck, mashed sweet potato with black pudding, cranberry confit. We drank cranberry martinis, French pinot noir, and then a glass of sherry with chocolate fudge brownies for dessert. And maybe we wouldn't have been able to do that if we'd had company, we certainly wouldn't have been able to work around Isabelle as much as we did, so in a way, it was good to be flying solo. 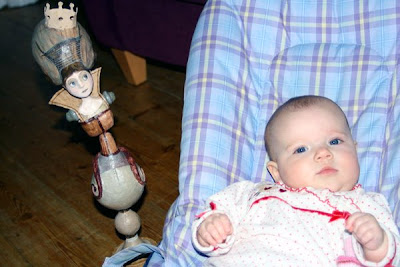 Isabelle and her French lady 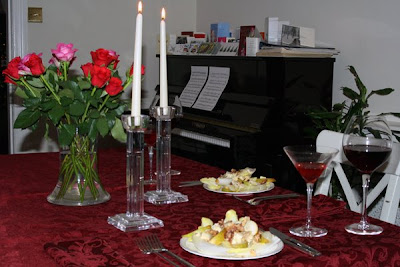 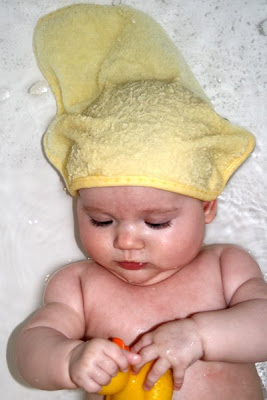 She prefers bath time to holiday time. She is modeling her long luxurious blonde hair in this photo. 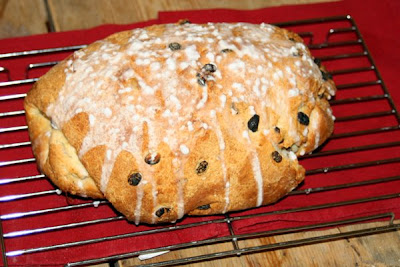 My one concession to Christmas baking this year was a loaf of stollen (I've been making stollen just about every year since I learned how to bake bread), and I can say with certainty that it was one of the worst ever. I mis-read the recipe (because someone was caterwauling in the other room), and I added ingredients in the wrong order so it had a funny rise. Furthermore the icing came out lumpy and it looks as though it has chickenpox. But it tastes good, and even though it's ugly we're eating it.

For Boxing Day we took a walk around Kew Gardens until our cheeks were rosy, and then came home to roast pork and spaetzle, and the discovery that little Isabelle is getting her first tooth! It's a sharp little fang, right in the middle of her bottom jaw. She is not a happy bunny today. 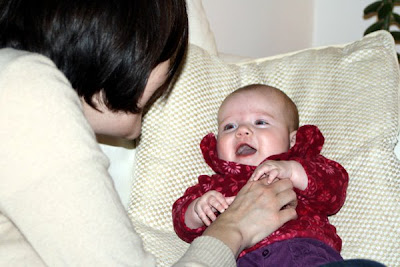 Isabelle on Wednesday, pre-tooth and happy

So we missed everyone, but it was kind of fun anyway. We really wish you could have been here.
Posted by A Puppet Opera at 9:27 AM

Pictures are GREAT; but we wish we could have been with you too. Isabelle is growing bigger, and more beautiful each time we see her. Good Work! We wish we could have a piece of your Stollen, right now. Could you arrange that, please? It's a spring day today, 65°F. The ice is finally melting, a bit. Don't you wish you were here? M&D