A Puppet Opera Sees: The Devil and Mr. Punch 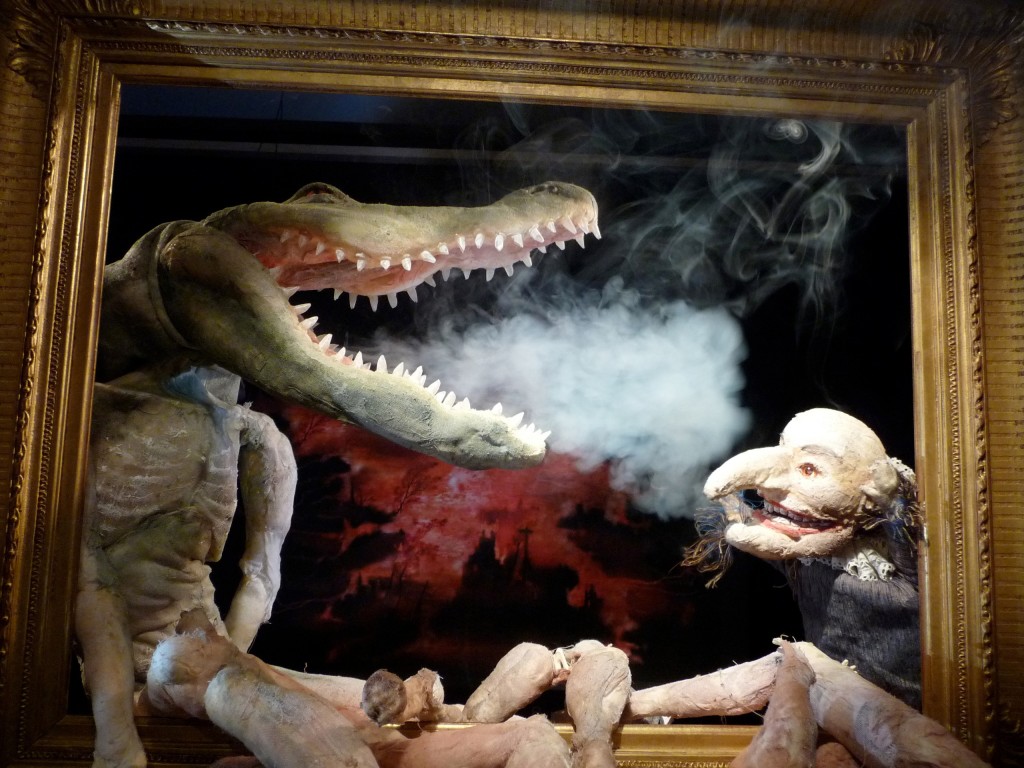 In a remarkable instance of whatchamacallit, your Puppet Opera correspondent has been to the theatre this week-- and not just any old play but the oldest and most noble of them all: a Punch and Judy spectacular! And I am able to urge you to hie thee to the Barbican to catch Improbable Theatre's The Devil and Mr. Punch before it disappears like so much stage smoke.

Having made his first appearance sometime while Samuel Pepys' lived, Mr. Punch is less seen now than in times past (he used to be a staple of street and children's entertainment). Which is hardly surprising; with his lust for instant gratification, his violent wife-beating, law-evading ways and his gloating cry of "That's the way to do it!" he is a pretty unsavory character. But the geniuses behind Improbable have found a way to bring Mr. Punch into modern times with their usual panache, paying tribute not only to the little fellow but to vaudeville, street theatre, and storytelling in general along the way.

The tiny Pit Theatre is set as though for a traveling show, with a many-windowed storefront through which puppets and props pass, hung with British and US flags (this is a co-production with an American theatre company---- yay!). We see the story presented by bowler-hatted puppetmasters Harvey and Hovey, who struggle to keep control of their puppets, and through their ramshackle narrative we follow Punch through a series of mishaps until finally we meet Punch in Hell, where sharp and shifty as ever, he talks the Devil into taking a day off, leaving him in charge of the underworld. Now that's the way to do it.

It is a remarkable piece of theatre, primarily because the performances are enjoyable and funny, but also because it reimagines some of the oldest stories, the oldest characters and simplest tales for a sophisticated contemporary audience. The blurred lines between performance and puppetry;original Victoriana with more modern interpolations; all teeter-tottering between control and wild abandon make for an ingenious, surreal piece of theatre. And the puppets, it must be said, are fantastic; the dancing skeleton, the typing dog and the acrobatic piggies are all a treat, but none more so than beady, tricksy Punch himself, seemingly reminding us that wherever we go or whatever we do, Mr. Punch lives among us still.