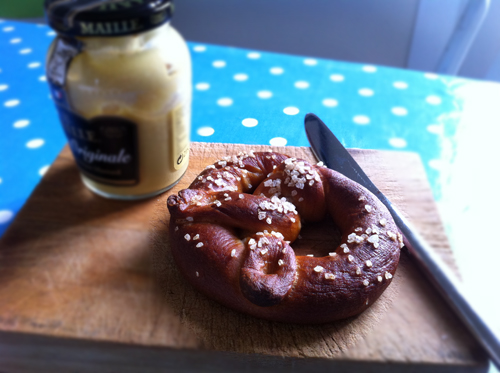 Is anyone else loving the Paul Hollywood "Bread" show now on the BBC? Even though one member of my household is gluten intolerant, we are drooling over the delicious array of home-baked loaves, and are very inspired to get our hands floury. With so many fun bread recipes (and hey, isn't bread dough basically the same as Play Doh?), there have been a lot of reasons to fire up the oven over Easter break. The most recent episode featured a segment on pretzel making, and Isabelle was so keen on taking a crack at those iconic German breads, she pestered and pestered until we gave them a shot. 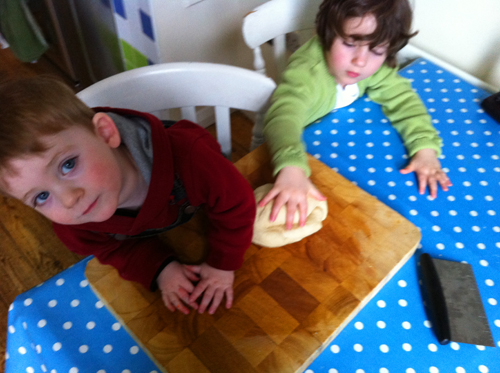 I made pretzels one other time (although they didn't turn out as well as this "authentic" Bavarian recipe), and it's an afternoon-long project worth attempting. It's a simple recipe: starts out just like an enriched bread dough with a long rise and a long knead to build up the gluten. Billy and Isabelle both enjoyed taking turns kneading the dough; made with high-protein bread flour it was basically like kneading a lump of chewing gum.

...but then things get a little crazy when you divide the dough, roll it into long snakes, twist the snakes into their pretzel shapes and leave them to rest in a cool breeze to form the chewy skin (luckily it is still freezing on my back porch today, so the pretzels were very happy taking their rest on the play garden table). 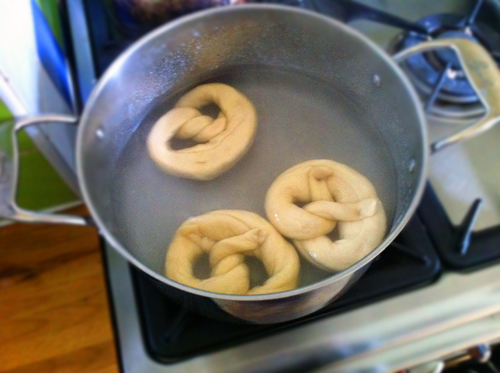 Then they go for a little swim in a boiling baking soda water bath (I didn't know this, but traditionally pretzels are dipped in LYE, yes, the caustic ingredient used as part of the soap mixing process. Since I didn't want to mess around with something that could cause blindness or burns at home, we went for the alternate baking soda method). After they come out of the water they get a sprinkle of salt and go bang into a hot oven. 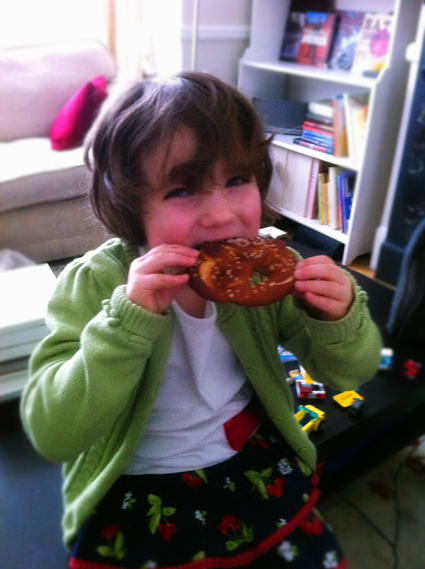 And when they come out 20 minutes later, they are delicious! Crispy on the outside, chewy on the inside, a perfect snack. I'll admit they would have been better with a cold beer, but I do draw the line somewhere.

If you are looking for a fun way to spend the afternoon in the kitchen with kids, bread making cannot be bettered. Isabelle and Billy had a great time stirring, kneading, and playing with the dough, and they love the magic that transforms flour, water, yeast and salt into a yummy treat. As an aside, while I'm enjoying watching a show about bread, I do think it is a bit sad to be watching bread making on television; I suppose in years past you'd be working along side your mother or grandmother in the kitchen while she baked bread for the family, and so you'd learn by doing. It was once a basic household skill, lost, I suppose, through the availability of ready-made, ready-sliced loaves. But I'm glad I rediscovered, it, and since TV has been a big part of that, I'm okay with it. Go make your own bread!

As a further aside, my batch of eight pretzels cost me £0.36 in ingredients, which means the total cost of each pretzel was around £0.04. So doing it yourself is not only magic, and fun, and delicious, but cheap.